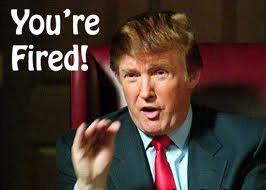 If my life were Celebrity Apprentice, I’d be giving Donald Trump a run for his money.

I’ve gotten great at firing people from my life.  You wrong me, you’re done.

Some people get a few more chances than others, until that final slight that sends their sum of missteps over the top.  Yes, I keep track.  If you’ve ever worked with me, lived with me, befriended me, interacted with me in any miniscule way whatsoever, you have a running tally.  Unbeknownst to you, the tiny ways in which you thought you were screwing me over and getting away with it were all being accounted for.  Sound much like a dysfunctional, paranoid worldview with a ‘get them before they get me’ mentality?
Depression is as ruthless as the cutthroat world of business. One by one, those around you enter the metaphorical boardroom, their performance as friend or mom or sibling appraised.  Those who failed to show up during my hour of need are goners.
My chiropractor is next in line (yes, I realize how ridiculous this perverse game is).  After a couple months of teetering on the edge with his pushy sales tactics, the attempts to guilt me into coming more often have gone too far.  Sorry dude, I don’t owe you anything.  I come when I want, I pay you for services rendered; that is the extent of my dues.  I’m real nice until you try to take advantage of it, then (as CeeLo Green put it) forget you, and forget you, too.
Then the day comes when you look around, and there is no one left.  In all honesty, I’m less miserable and more at peace the fewer people that are in my life.  That way I don’t sit around wondering why people don’t call, why they don’t care, why I’m worthy of neither their time nor attention.  I’m tired of caring more about others than they do about me.
Then there are the other days, when the empty void you have created sucks the breath out of you.

My aunt passed away on Tuesday morning in a hospital room by herself.  No one in the family even knew she was there; a coworker had driven her there two days prior.  Fifty-seven years old and morbidly obese, she’d been alone since a divorce and subsequent rape in her early twenties.  It’s always sad to see another human being essentially give up on life and love and happiness.  When it’s YOU, your own pain outweighs the sadness of others.

The sick part is, I’m jealous.  I don’t think I can do 30 more years of this bullsh*t.  Hell, I don’t know if I can do tomorrow.  I’m pretty sure no deity would answer my prayers to just up and die, but I beg to be let out of this mess anyway.  Let someone live who’s enjoying it.

I turned 31 yesterday.  Still jobless, hopeless, and a hundred pounds overweight.  Another year passed in paralysis, the weight of my screw-ups so unbearable that stillness is my only solace.  I have effectively shut everyone out of my life, and the only reward is that they can no longer hurt me.

I can’t help but wonder if it’ll be another three decades before I’m dead and no one gives a damn.  The thing is, I don’t want anyone standing over my dead body who never stood beside me in life.
Posted by downfromtheledge at 1:02 AM